As well as our own productions, Two Shades of Blue actively promotes theatrical productions. A modest success at previous Edinburgh festivals has allowed us to support other theatre.

We focus on works of light entertainment, which we define very loosely, but broadly includes anything which is enjoyable by a wide audience and doesn’t take itself too seriously; this may be music, musicals, comedy theatre, pantomime, magic shows, sketch comedy, or punch and judy. We are particularly interested in promoting student theatre, and theatre at the Edinburgh Fringe Festival.

As well as our in-house shows, Two Shades of Blue is delighted to be supporting two exciting shows at this year’s Edinburgh Fringe. 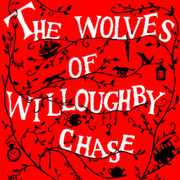 Left in the care of an evil governess, two cousins must fight to survive and regain what is rightfully theirs. Joan Aiken’s rollicking tale of dangerous villains, mistreated orphans, shipwreck, daring escape and terrifying wolves is brought to the stage by Not Cricket Productions.

Set during the fictional nineteenth century reign of James III, this faithful adaptation is location-specific, and uses puppetry, music and steampunk visuals to bring the novel to life.

Premiering at the Edinburgh Fringe Festival 2011, you can catch ‘The Wolves of Willoughby Chase’ from 3rd-29th August, 5.20pm daily at C soco . For more details and bookings, just go to the website

On a somewhat different note: Sally Outen works in a bookshop. She went to Indonesia, once. She likes cats. She’s also transsexual, bisexual, and a (not angry, just disappointed) feminist. She’d quite like to talk about books, cats, and Indonesia, but people always seem more interested in the shape of her genitals…
Sally is performing on the 20th and 22-29 August – The Bongo Club. For more details, please look at her website.

In 2010, we were delighted to be able to support the Cambridge Fools’ exciting new musical comedy, “When In Rome”, and the extraordinary feminist burlesque collective Lashings of Ginger Beer in their shows at the Edinburgh Fringe. Both shows proved extremely popular and received excellent reviews from both audiences and many of the local publications. In fact, why not have a read what the Cambridge Fools said to us: 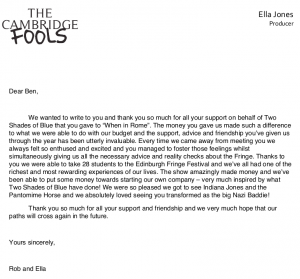 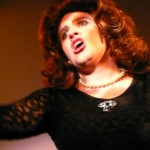 During Summer 2009, we were delighted to be able to lend financial investment and marketing support to “Merman on Broadway”, by Joyous Pie Productions, featuring the incomparable Dominic Mattos as the incomparable Ethel Merman.