Hello! Welcome to the first in a potentially very short series of blogs from the cast and crew of Batman!! Holy Spoof Musical Batstravaganza! Currently typing is Harry, otherwise known as Supreme Overlord The Director, but others will probably join in later.

We’re only a few days in and already it’s looking awesome :). Today was filled with tap-dancing, singing and all manner of fun and exciting games.  This evening our awesome costume maestro Jenni has been bleaching hair–as lots of the cast are playing familiar faces we want to make sure that they look the part. 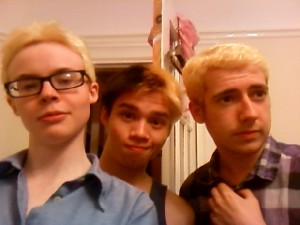 Commissioner Gordon, Two-Face and The Joker, now with bleached hair

Our marvellous supreme overlord Director has now given the blog-creating-machine to me, Commissioner Gordon. Not a particularly wise move, as I’ve been absent from the rehearsing process since the weekend and I’m in no position to tell you how it’s been going. (Also, as Harry points out, I’ve had a lot of gin.) But the minute I turned up this evening I was given hugs, pizza, gin and a dye job, so from my perspective EVERYTHING IS INCREDIBLY EXCITING. And I’ve also been told there are some highly impressive set pieces that have been being rehearsed since I was last here… including tap-dancing being taught to people who’ve never done it before?… which I can’t wait to see!

Hello! This is now Janet, otherwise known as Victim, and I’d better not stay typing this for long otherwise the chances are fairly high that some sort of supervillain will come and steal the laptop. And then our supreme overlord director will probably not be very pleased. But anyway, yes, everything is awesome and it just keeps getting awesomer. Tomorrow everyone learns the choreography for the final song, so I’d better go back to finishing off writing that down before I forget all of it. And now Ros has just made a terrible innuedo-ness, and now Arkady has followed it up with even worse. So. Anyway. Over to the boy wonder!`

Robin here. Today was a dark and stormy day, and I had the most uplifting musical experience of my life in the community room of a church in Harrow.  A nearby woman was moved almost to tears, and the entire room burst into spontaneous applause. No pressure, future audience.

Yawn.  This is a rather sleepy Catwoman who has been rudely awakened from her cat-nap in order to ‘blog’.  Such an ugly word, very unfitting of my attention really.  Oooh! A moth! That needs some stalking and catching.  Anyway, where were we, my little internet kittens? Oh yes, my cat-nap. I was having the most wonderful dream about Batman and I floating above Gotham in a blimp full of catnip and balls of string. He was just about to stroke me too, when I was told to inform you lot of what I’ve been up to. I hope you’re happy.  So tomorrow I will once again be practising my feline charms on that gorgeous hunk of bat.  I’ve been at this for days now and he still won’t recipricat. Unhappy cat face.

This is Mr Freeze. Mr Freeze has the coolest costume. I’ve come from USLES, and was brought in late. Despite this, nobody has given me the cold shoulder and the food has been good (iceberg lettuce). Coming in late means focussing on my part quite hard, in order to get the mannerism and accent right. The mannerisms are quite tricky – Mr. Freeze is very robotic, so every action has to be carefully planned, and finding places to express the right emotion is tricky. Mimicking Arnie’s accent is also difficult – Arnie doesn’t sound  much like himself. I also have the most difficult fight scene. Fight scenes are great fun, and we’ve got it looking really good and it’s going to look really cool. As long as I don’t get frigid on the opening night, we won’t get a wintery reception. In truth there’s snow way this can go badly, and I look forward to getting onto stage properly. Come see. It’ll be very ice to see you. 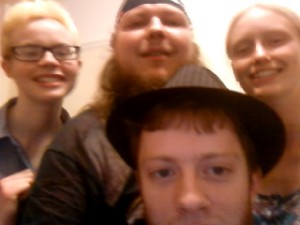